This Fleece Headband Ear Warmer Pattern (Free) is an easy sewing project. This DIY headband can also be a no sew fleece project.

You can make a beautiful headband that is stylish and warm for everyone you know since this pattern comes in baby to adult.  The Fleece Headband Pattern Ear Warmer makes a great scrap buster.  With this one free fleece sewing pattern I’ll show 3 different ways you can use it. You can make a regular one, a reversible one, and a no sew version from this free sewing pattern.

You will need the following:
a little more than 1/8 fleece (or jersey knit)

For the no sew version:

a little more than 1/8 fleece

Tip: look through the remnant bin for some fabric deals!

Print up the pattern (you can get assembly instructions here).  Make sure that the pattern is printing to scale. Find the size that you want to make the corresponding line.

Cut down the pattern piece to the size you’re making.

Fold over fabric  – so you can place the pattern on the fold.

Cut out 1 of the pattern for the No sew and single layer versions.

For the double thick or reversible fleece ear warmer cut out one more of the pattern from a different color of fleece. Cut out a rectangle of fusible interfacing (two if making the reversible version) that is a little larger than your button.

This is the shape the headband should be when unfolded after being cut out.

To finish the edges of the head band we need to turn them to the wrong side.  If it’s hard to tell the right and wrong side of your fleece there’s an easy trick:

The fleece will curl into the wrong side.  Set the fleece ear warmer pattern with the right side touching the work surface, the wrong side facing up.

Turn the edge up .5 inch to the center along both sides.

Top stitch all the way around the Ear Warmer headband.

Place the rectangle of interfacing at one end.

Pin, and sew all the way around the headband with a .5 inch seam allowance, leaving a 3 to 4 inch gap for turning.

Before we turn it there’s a few things we need to do.

On the wrong side of the fleece  Iron on the interfacing at on end.

Do it to each side in roughly the same place.

This will help with the turning of the fleece sewing project.

Turn right side out.

To close the turning gap, pin into place and top stitch around the head band, sewing the gap shut in the process.

Grab your cut out pattern piece.  Using the curl test make sure that the wrong side is facing you and the right side is facedown on the work surface.

In order to make this washable I recommend these glue sticks.  Get your glue gun heating up.

Using a hem gauge turn the edge over .5 inch and glue down on each side.

It’s time for the button and button holes.  If button holes make you nervous check out my tutorial here.

Measure and mark your button hole.  I like to place mine about 1.5- 2 inches from the end.  To get and idea of where you want it you can place it on your head and mark, if you’re making it as a gift I recommend adding two buttons to the headband so there’s some size adjustment possible. Mark the top of bottom of the button hole.

Then draw a line from one marking to the other for you to follow.

Layout and mark where you want your buttons to be on the other side.  They will be on the right side of the fabric.

Like the single layer version find the placement of the button hole.  You can do this by placing it 1.5 – 2 inches from the end or by placing it on the head of the person you’re making it for and marking it.

Mark the top and bottom of the button.

Draw a line between the two marking to follow for your button hole.

Sew on the button hole.

For the double layer fleece headband you have some options.  you can either place two buttons on one side for size adjustment or…

You can place one button on one side and

one on the other to make it reversible.

For the no sew fleece ear warmer pattern we’ll fake a button hole by making a glue rectangle at one end.

The glue rectangle will serve as a button hole and keep the fabric from warping badly.  Make the rectangle that is the slightly larger than height of the button and allow the glue to cool complexly.

Snip a slit through the middle of the rectangle that is large enough for the button to go through.

Glue the button to the other end of the no sew fleece project.

Make sure that you just glue the center.

That’s the no sew version finished!

If you want to dress up the headband you can add flowers – like this or this one.

Download the free pattern by filling out the form.

By downloading  you are agreeing to pattern terms of use.  Fill out the form to have it delivered to your inbox.

1 – cut and sew the headband

Optional – on one end of the band iron a scrap of fusible interfacing to reinforce where you will put your button or button-like hole. See flapper headband slim pattern for picture.

Turn edges under a half inch.  Using a .25 seam and straight stitch around the band.

At one end of the headband and using the button as a guide mark the top and bottom of the button. Move one dot a third closer ( the fleece will really stretch since we haven’t reinforced it and we’re not making a button hole).
Draw a straight line between the dots (this will help you make a neater box).

I am feeling lazy so I’m not doing a button hole today.  Just make a small box using your guides with a zigzag stitch. Snip a slit in your box.  Sew the button to the other side of the headband and your done!

I like to make the flowers removable so you can wash the headband (make build up).  Sew a small triangle (like you did for the button only much smaller – see my thumb?).  And Cut a slit.  Now your flower can slide perfectly into place!

You can get a free copy of Adobe reader here. By downloading  you are agreeing to pattern terms of use. Click the picture of the pattern envelope to download the .pdf ! 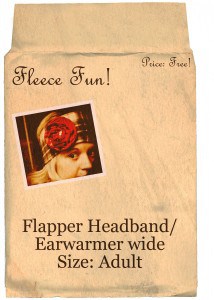 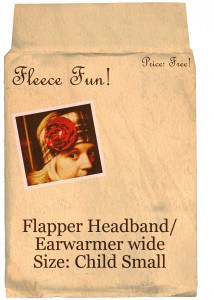 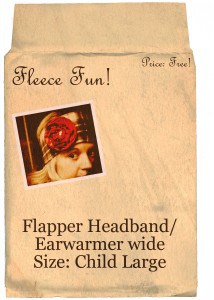