This Princess Poppy Costume DIY, inspired by the movie Trolls is an easy sew!

Some quick seams and some Velcro and you have a Princess Poppy costume.  In the example I used felt, but fleece will also work for this pattern – but felt is a lot less expensive and great for costumes.

For this Costume DIY you will need:

1 yard of felt or fleece in blue

3 inches of sew on Velcro

For the troll hair see this tutorial

~ I have over 40 Costume tutorials!  You can check out all of them here~

You can find instructions on how to assemble the pattern here. Please note that there is something a little funky about this pattern.  Since the front and the back are not symmetrical I have made two different colored lines on the top. 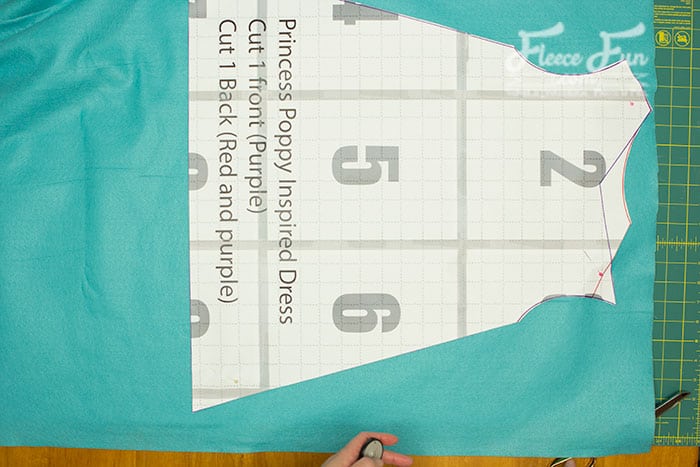 One is for the front and other is for the back.  I’ve done it this way so you don’t have to assemble two large pattern pieces and it saves paper.  You need to pay close attention to the instructions or you will cut it out wrong. 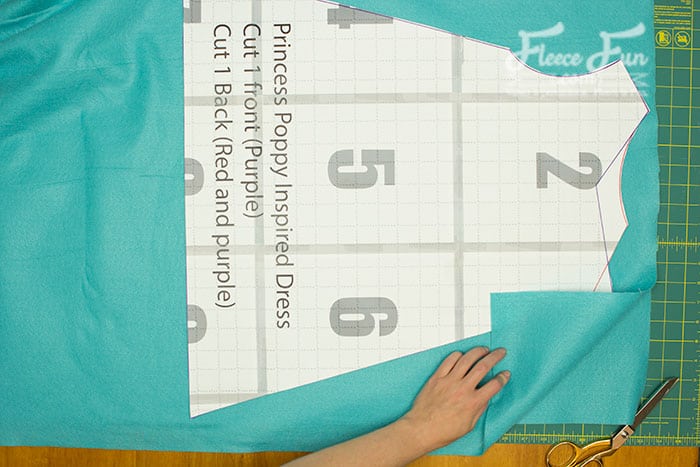 When you cut out the pattern make it so you cut the most outside line on the pattern.  Place the pattern on doubled fabric. 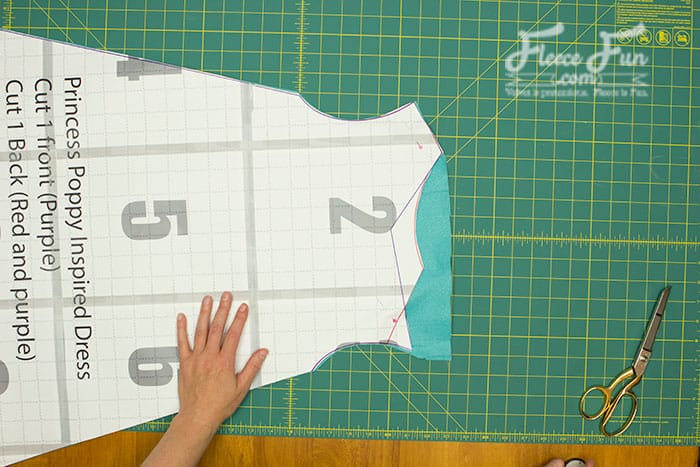 Cut out through both layer up to the tops of the armcye (arm holes) then stop.  Separate the two pieces, and repin to just one layer of cloth. 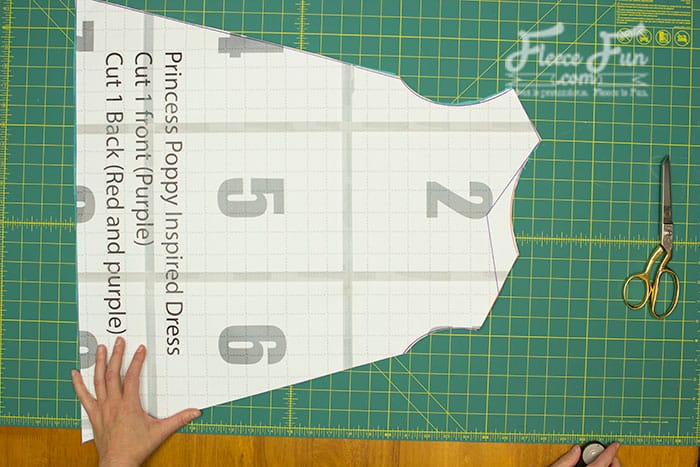 Fold the little triangle down so the red line in one continuous line.  The cut out the top along the red line. Set back piece of dress aside 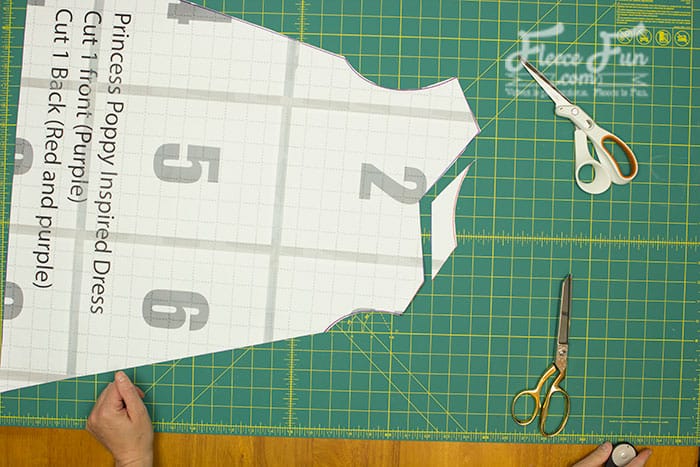 Now cut the pattern along the purple line as shown and unfold the triangle you folded down. Take the remaining piece of the dress and pin the pattern to it. 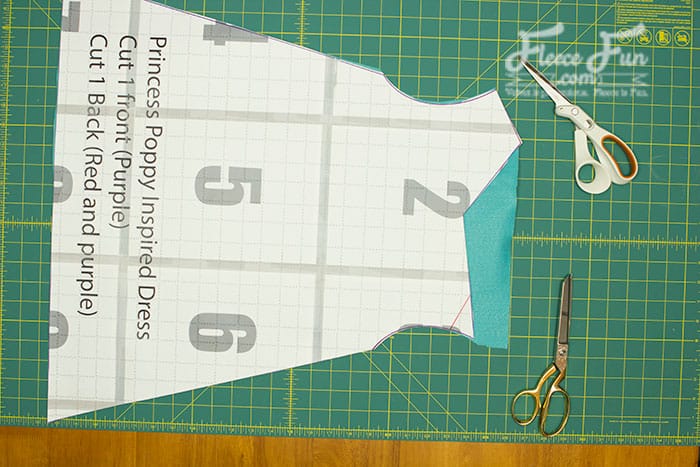 Cut out the front. 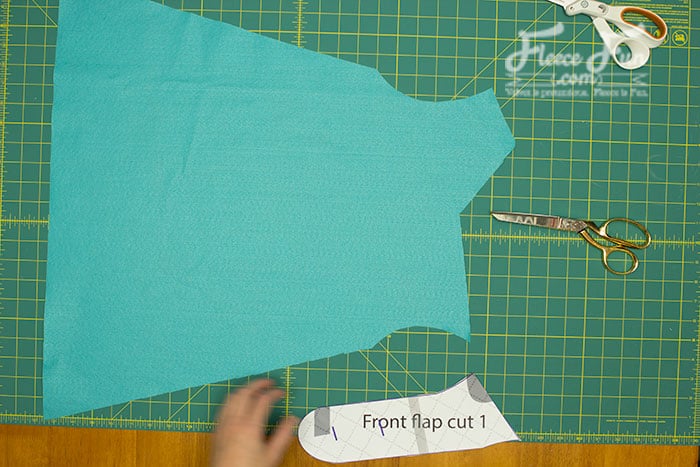 Set the front of the dress aside. 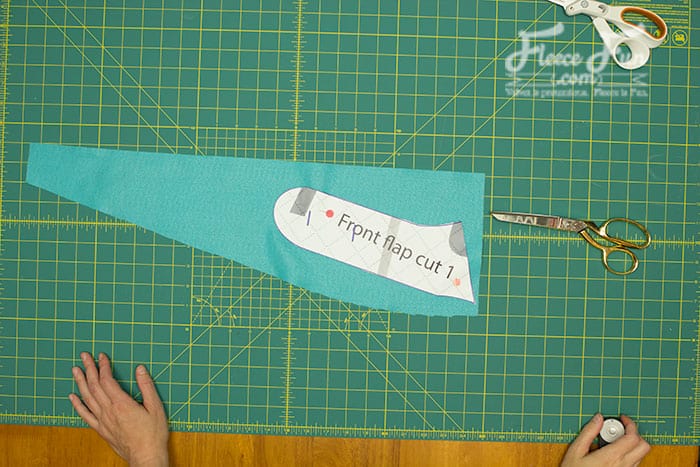 Cut one of the front flap. This is the flap that will cross to the front of the dress. 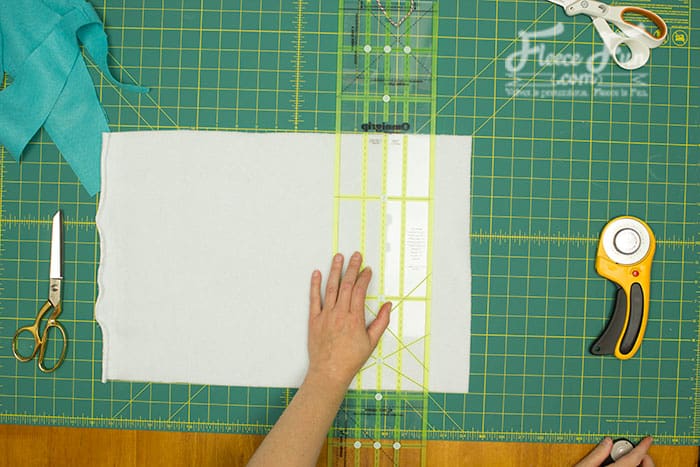 Cut a strip of white fabric that is about 2 inches wide and 8 – 10 inches long.  This will be the “stitch” on the front flap of the Princess Poppy Dress. 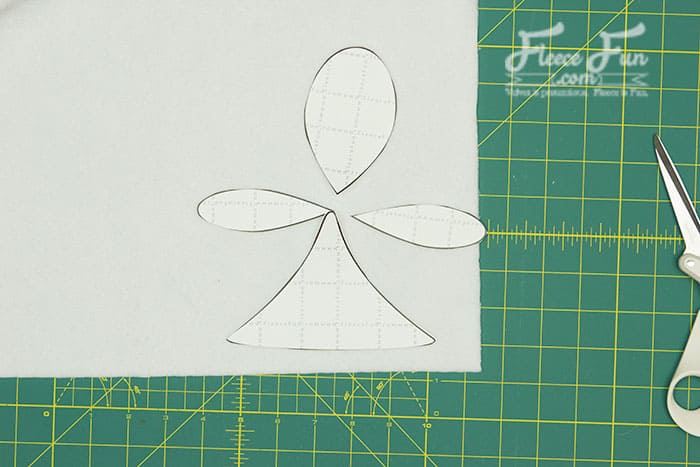 Cut out the Princess Poppy DIY dress decorations enough to make 3 to 6 (I confess in the example I only put them on the font – so if you’re looking to save some time there’s a short cut for you). Set aside. 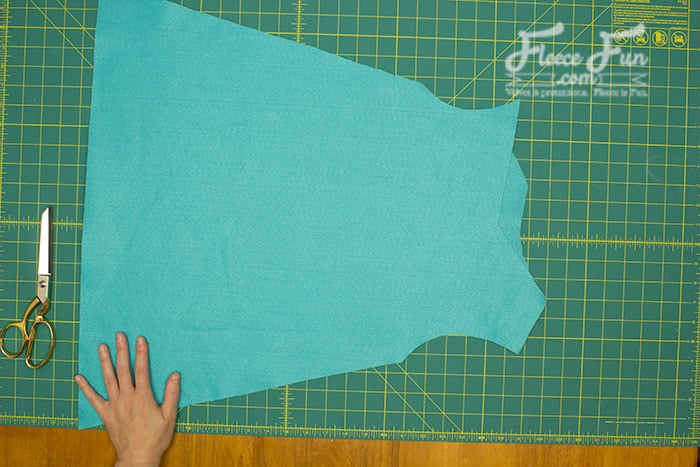 After all that cutting the dress comes together really fast.  Lay right sides together of the front and back pieces, making sure that the shoulder pieces lines up. 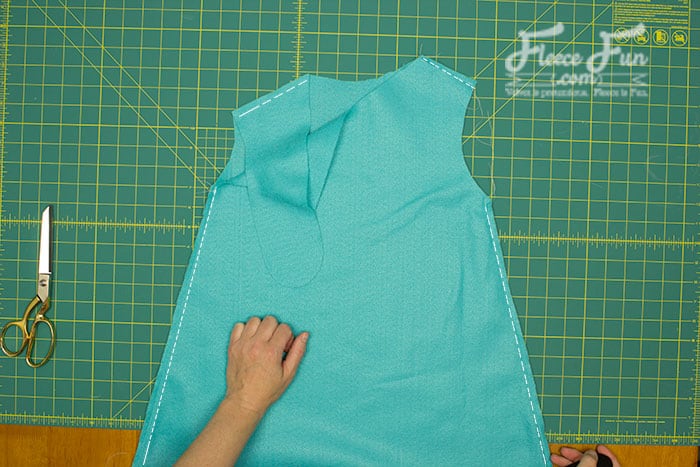 Tip: No I know this is a terrible things to say on a sewing blog…but if you’re desperate you can glue gun the sides and shoulder piece together.  Just keep in mind that this will be a “wear once” costume as you won’t be able to wash it and a seam could split if your little troll is too hard on the dress. 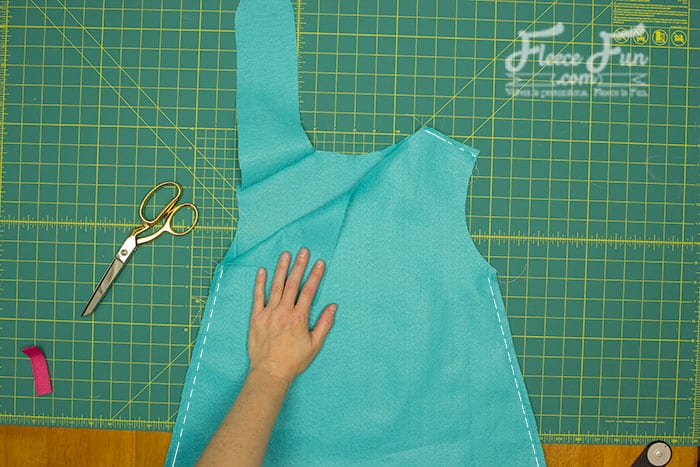 Once you have sewn all of that, turn it right side out. 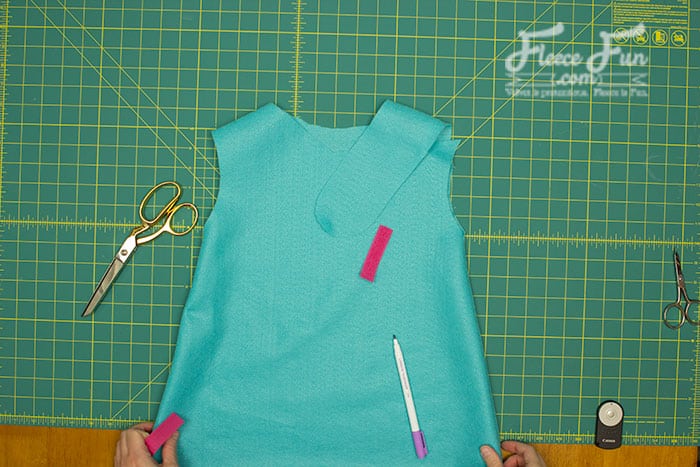 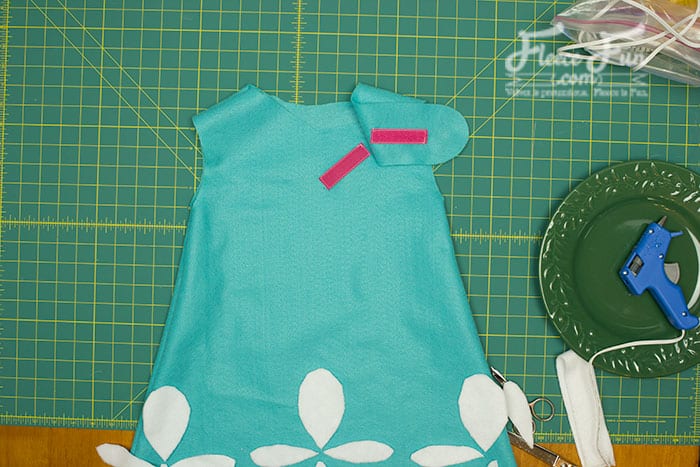 You might have notices that Poppy’s dress has a subtle green ombre at the bottom (this is a subtle clue that she and branch belong together…sorry film student moment).  To achieve this look just get some cheap spray paint and tape the bottom of the dress.  Go across the dress a couple times, then lift up the next layer of paint spray a couple of times, lift up the next layer.  I strongly recommend that if you are going to do it, do it now. Before you add other detail.  Allow time for the paint to dry.

Tip: It’s a nice touch to the dress but if you’re just trying to get the project sewn up quickly it’s ok to skip this step. 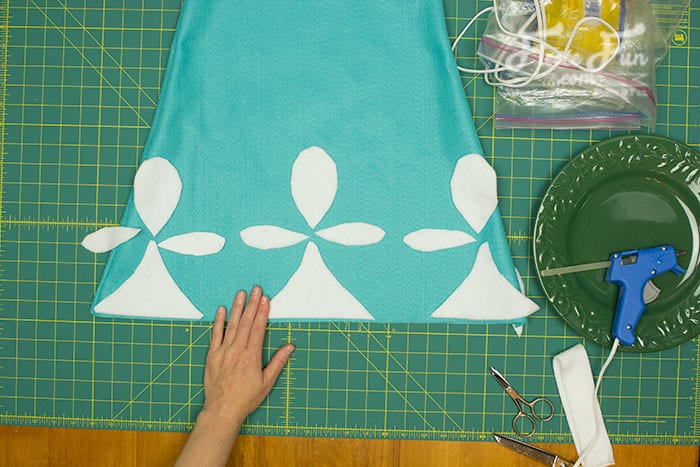 Layout where you want the white pattern to go on the bottom of the dress. 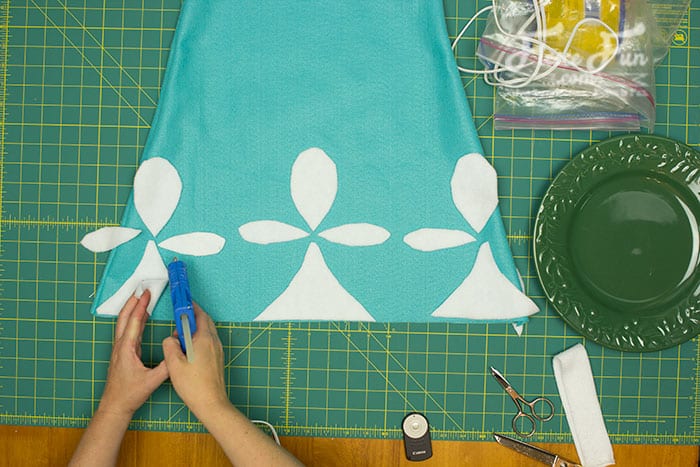 Using a hot glue gun you can glue down the decor.  If you want to applique you can use a glue stick so the elements to Poppy’s dress will stay in place. 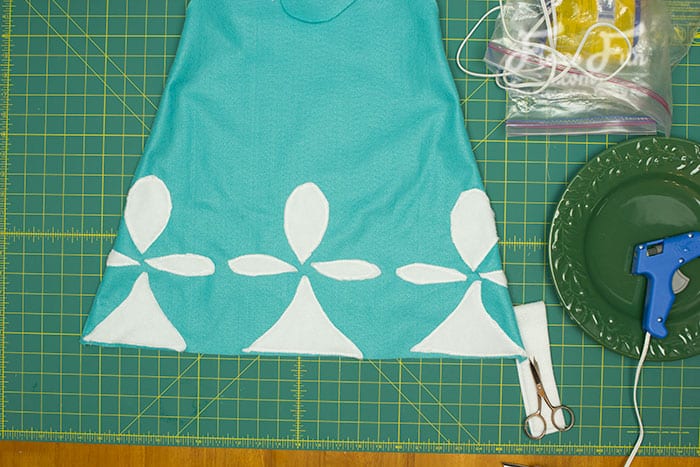 Then, using a sewing machine and a zig zag stitch you can applique it on. 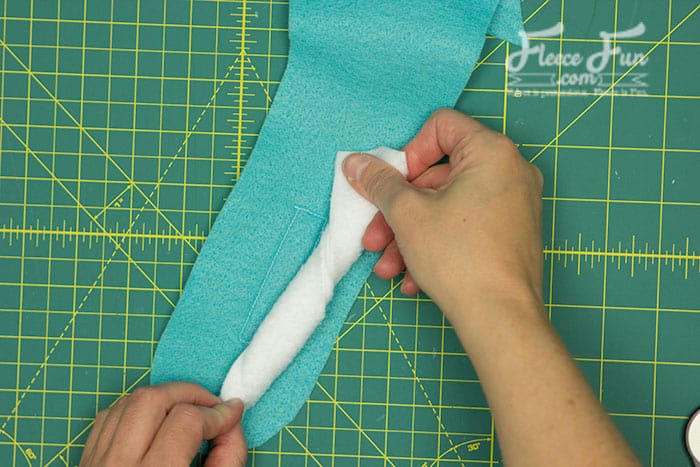 Final touch: take the white strip you cut and fold it half, then twist it.  Snip a little hole in the cross over piece and insert one end int, snip a second hole on the other side and insert the ends in. 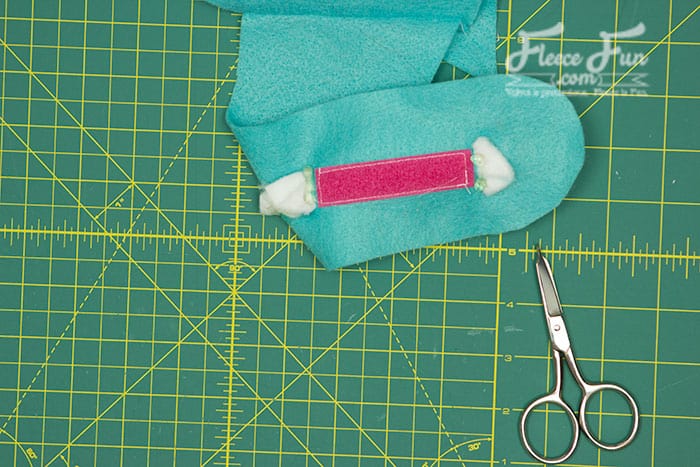 Glue in place with a hot glue gun and trim ends if necessary (this should cover the Velcro rectangle so it’s not seen.)  You’re finished with the Princess Poppy costume DIY!

I only approve of Adobe reader. By downloading  you are agreeing to pattern terms of use.  Fill out the form to have it delivered to your inbox. 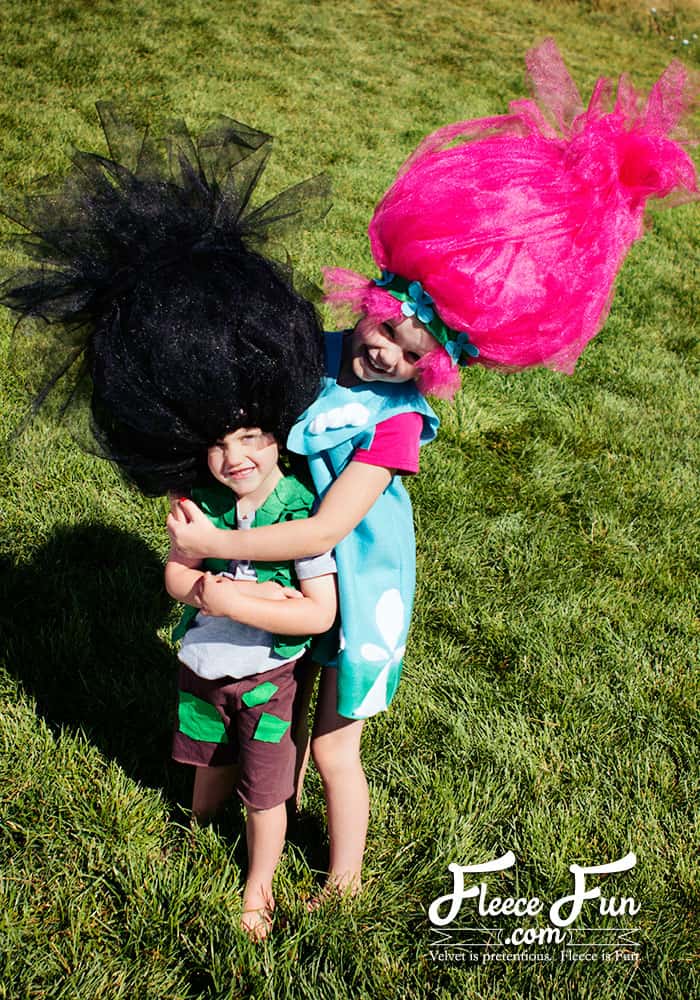 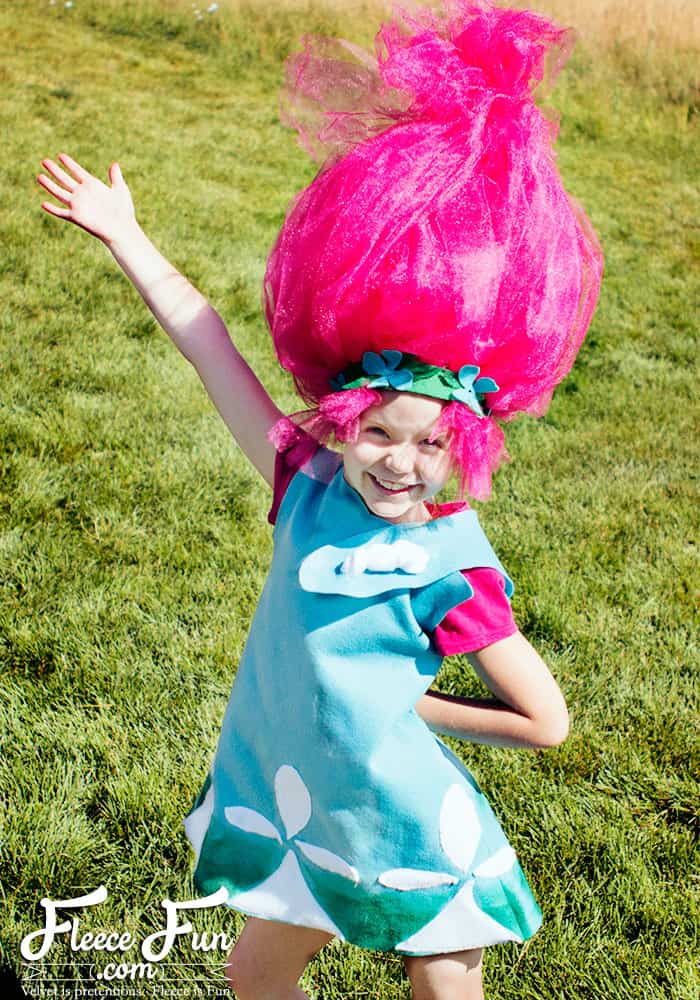